SPECIAL NOTE: Due to the lack of information to be relayed for Kaulig Racing and Richard Petty Motorsports, their listings are included here.

RCR Campus in Lexington (aka Welcome)

Overview--In addition to the Cup and Xfinity race shops, the RCR campus also hosts the RCR Museum, located in the original race shop that hosted the team during its glory years in the 80's and 90's.  The museum itself charges $10 admission, which combined with its long distance from the rest of the sport's race shops might give some visitors pause.
Beyond that, two other RCR-affiliated race teams are based on the RCR campus--Xfinity team Kaulig Racing and Cup team Richard Petty Motorsports.  Kaulig racing is open to the public, while RPM is not.

MUSEUM Ratings--
To See and Do: 5 there is a lot to see throughout the museum--give yourself at least 45 minutes, maybe more if you're a hardcore Dale Earnhardt Sr. fan.
Accessibility: 4 there's a decent amount of displays and sections that go beyond racing, featuring Richard Childress' work with various outdoors organizations and the NRA.
Gift Shop: 5 lots and lots to buy here, including sheet metal and other car parts that aren't really available elsewhere.
Friendliness of Staff: 4 the receptionist was quite helpful, and I got to see Chocolate Myers working on his radio show in his booth.  The only thing I would've preferred would've been a staff member available in the museum itself, but its a minor issue.

Insider Tip: The RCR and Petty Museums have a reciprocal agreement--go to one and keep your receipt.  Present it at the other and get 10% off your admission. 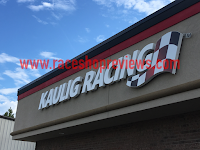 KAULIG RACING
While there's hero cards available, there's not much else.

RPM
This shop is not open to the public at all.

Final Verdict--See the museum you're a Dale Earnhardt Sr. fan or if you're already in the area for the RCR race shop.  Skip it otherwise.
Posted by Mike Mackler at 7:24 PM